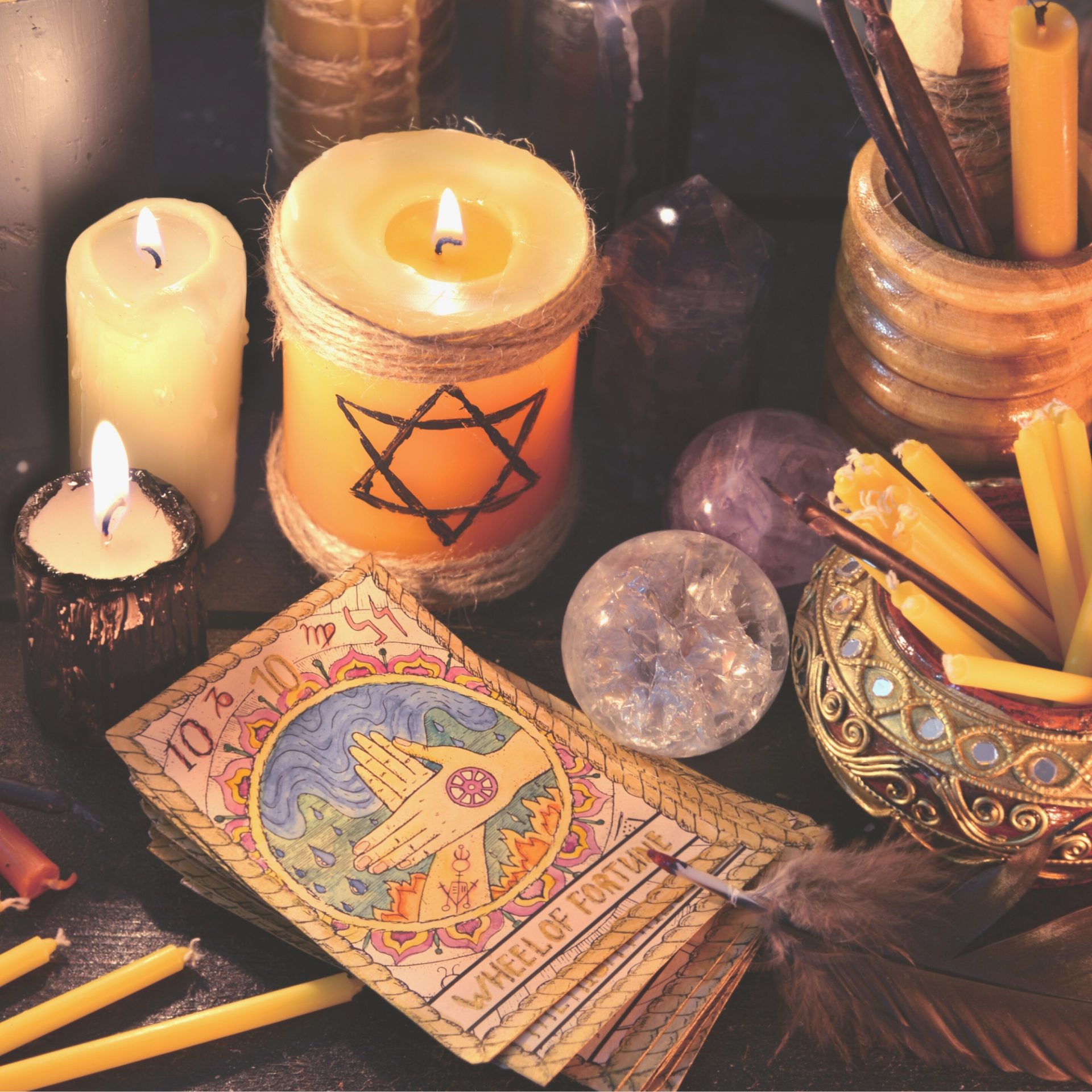 There are many forms of divination that have been used by all cultures and across all periods of documented history.  It seems that no matter the climate or functions within any known society there has always been a drive to read signs and try and predetermine how events might unfold. The list of all known methods of divination is long and a bit overwhelming. Several forms of divination continue to be used consistently today, some have become familiar and others are a little less common. Two of the most common methods are Tarot Cards and Oracle Card.

Oracles cards are a great place to start if you are interested in looking to the cards for guidance and yet are overwhelmed by the depth and complexity of the Tarot deck. Oracle decks tend to be simpler and straight forward with their imagery and meanings. What I love about Oracle decks is twofold, first, they will give you a quick answer or intention to focus on and secondly that there are so many of them readily available that it would be nearly impossible to be unable to find a deck that you can connect to. Also, most decks come with handy little guides meaning that literally anyone can understand the reason for pulling the card.

Oracle decks are thought to have originated in the 19th century with the Lenormand deck. Marie Anne Adelaide Le Normand was the most famous fortune-teller during the Napoleonic era in France and Normandy. She utilized several different forms of divination including coffee grounds and eggshells. She also used a 32 French Piquet cards and a German 36-card deck, the current deck of the Petit Le Normand is classically a 36-card deck and still utilizes the symbols of hearts, clubs, diamonds, and spades. Each card has a simple image and they are easily related to their meanings. For example, there is a Dog card and it is meant to represent someone your life who is loving and loyal as a dog, or the Snake card warns you that someone is trying to bite you and you must use caution in dealing with them. The cards are typically read in a layout called the Grand Tableau, which utilizes all the cards. They are laid out in 4 rows of 8 and a row at the bottom of 4. The placement of either the Woman or the Man card will allow the reader to read the story of the querent.

Today Oracle cards follow no one set structure or theme. They are as varied as their creators and can be any size, shape or number. The truth is any deck will do if you feel it connects to you. Please keep in mind that whether you are willing to accept the guidance or not is entirely up to you, as you are in control of your own choices.

Having said that, if the guidance is meant for you, and you choose to ignore it, chances are it will continue to repeat until you are ready to explore why you are receiving it. I have experienced this in my life many times, one incident occurred when I was on the hunt for a new deck for myself. I was in a store that must have easily held a hundred decks to choose from. My personal method for exploring the decks, until I could find the one, I wanted, was to pull the decks that caught my eye and then shuffle them and pull three cards per deck. I must have pulled easily 15 to 20 decks of cards and pulled my three cards out of each one.  The decks were from a variety of creators and no set style of imagery. The themes of the decks where varied and the variety of messages the decks contained were not set in any way. And yet somehow, I managed to pull the “Letting Go” or “Releasing” card from every single deck I pulled. I am no mathematician, but I think we can agree the chances of pulling that message from every deck I touched are small, and yet I did.

Oracle decks are fantastic for pulling a card a day to set your intention for the day. They are also very good for quick direction and overall themes. I find them to be gentle guidance and that often the message they give you is so personal that it truly could not be for anyone else. If you are looking for a little clarity on how to proceed or a simple yes or no answer, then I would suggest that oracle cards are the way to go. If you are just starting out on your path to reading cards, I highly recommend Oracle cards as the best place to start.

Oracle cards are a great entrance deck, a good way to begin to enhance your relationship with your own intuition. Once you have built up a comfort level with the idea that you can accept your intuition as your guide to the cards, I would suggest that that is a good time to pick up a Tarot deck. The Tarot is deep and complex and pulls out stories at levels that most oracle cards just don’t go. There is a long run tradition that your first Tarot deck should be gifted to you. Keep in mind however that it was likely born of the fact that back in the 16th century most people did not have money to spend on such luxuries as well as the fact that decks were not mass-produced and likely not easy to come by. I honestly don’t feel the need to follow this tradition any longer, when literally any deck can be at your door within days. Having said that, I was gifted my first deck well over 15 years ago and I was very blessed to also be guided by an incredible strong mystic on how to read those cards.

The first historical reference of a Tarot deck comes out of Italy around 1440 and references what appears to be a complete 52 card deck. From there we find the next reference from Germany hailing from around 1505. The first appearance of the higher arcana cards was in approximately 1718 in Germany, although the cards were referred to as Clergyman Cards. The decks were used as playing decks for several different card games and the Clergy often used them until the church abolished gambling as being immoral. The decks seem to have been used for divination pretty much from inception and across most of Europe.

Let’s be clear, although there are many guidebooks and set meanings of tarot cards, each reader must rely on their own intuition to guide them in reading the cards. The cards are really your tool into your connection with the Universe and there are truly no wrong ways to read the cards. I do suggest that you find a Tarot deck that speaks to you and that you start with a simplistic deck. There are some incredibly beautiful complex decks, that a first-time reader would likely struggle with. I started with the classic Rider Waite deck and waited over a decade to attempt another Tarot deck. There are many different traditions surrounding the deck, as with anything take what works for you and release the rest.

Three things I would advise you do is to find a way to clear the deck that works for you, find a way to shuffle and a layout that you can easily remember and read. Personally, I just shuffle and focus on any outside energies draining away to clear my decks, as for layouts, I have found that different decks work best with different layouts. As far as layouts go the most widely used would be the Celtic Cross and it is the one that I started with and used consistently. Shuffling is very individual and often can be dependent on the size and shape of your cards, some readers do not allow others to touch their cards and will shuffle for the querent, personally I prefer that the querent handle the cards to give the cards an opportunity to connect. However, I have also pulled readings when not physically in the presence of the querent and shuffled while focusing on them.

I think the most important thing to keep in mind is that there are really no set rules, you can’t really do it wrong if you allow yourself to be guided by what feels right for you. Some readers are certainly better than others, and as with anything practice will increase your skill. Also, keep in mind that you will not be able to know anything that the querent does not want to know. If they are even if they are seeking the answer if they fear it you will be blocked from seeing it.

Overall, I would suggest that the best way to learn to use any divination tool is to dive in. If you are lucky enough to have a mentor, then likely it will be easier to develop. Having said that if you can’t find a teacher in human form, then find a book that speaks to you and use it. If you like possibly to find 2 sources that work for you. I would highly suggest that you limit your resources to 2 or 3 that make sense to you. Just as a buffet can be overwhelming and cause overeating, too many sources can muddy the waters and have you second-guessing your intuition.  Have fun, build a practice that works for you and remember that we all do things in our own perfect time.